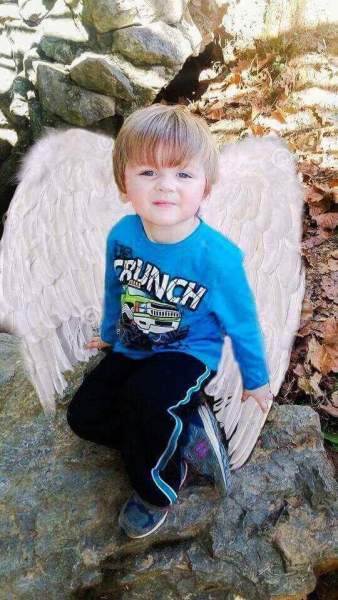 Jason Robert Braden III age 3, of Clinton, TN passed away on Friday, January 13, 2017 at the University of Tennessee Medical Center in Knoxville, TN from injuries sustained during an automobile accident in Oak Ridge, TN. He will be dearly missed by all his family. Jason loved to watch Tom the Tow Truck on his tablet; his favorite dogs on Paw Patrol were Marshal and Chase. Jason’s favorite song was burning it down, and loved his baby brother, Justyn. Jason is survived by his parents, Jason and Ashley Braden of Clinton, TN; baby brother, Justyn; grandparents, Jason Robert Braden of Clinton, TN, Rebecca Asbury of Powell, TN, Lisa Hadley of Powell, TN, and David West of Wartburg, TN; great grandparents, Robert & Helen Braden of Clinton, TN, and Paul Downam from Clinton, TN; and a host of aunts, uncles, and cousins. Jason’s family will receive his friends on Sunday, January 22, 2017 from 12 noon – 2:00 pm in the chapel of Jones Mortuary with his funeral service to follow at 2:00 pm with Nathan Braden officiating. Jason’s interment will follow his funeral service at the Anderson Memorial Gardens in Clinton, TN. Jones Mortuary in Clinton, TN is in charge of all arrangements.
To order memorial trees or send flowers to the family in memory of Jason Robert Braden III, please visit our flower store.