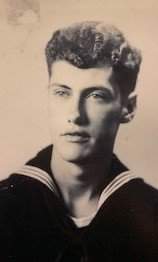 Eugene "Gene" Stair, lifelong resident of Clinton, was born on October 7, 1932, and went through the Pearly Gates to his mansion prepared for him on August 20, 2019. To say he was truly a wonderful husband, father, and grandfather would be an understatement. His family loves, cherishes him and adores him beyond measure, and if given the opportunity to have negotiated this with God would surely have begged to keep him here forever.

Gene was best known for his outgoing personality as he was friendly, and personable to everyone he talked to.

He was a U.S. Navy Veteran and served on the U.S.S. Antietam and the U.S.S. Coral Sea. When he got out of the service, he married his loving and surviving wife of 65 years JoAnn Stair. He went to work for Walker Chevrolet in Clinton and then Fox Motor Company, then Y-12 where he retired in 1992. Fox still employed him into his elderly years. He thought the world of the Fox family.

Gene is not only survived by his wife JoAnn but he also leaves behind his; son, Darryl Stair (Debi); Grandchildren, Cody Stair and Brian Seiber.

He is survived by sisters Onah Fox and Mary Lou Wilson and several nieces and nephews., and especially nephew Eddie Stair.

Gene was a member of South Clinton Baptist Church. He was a conservative Christian Republican who'd tell everyone that he may not like Trump's mouth but to vote for him because he's done a good job as president. He wholeheartedly supported the NRA. He was an avid Tennessee football fan and predicted this would be their year. He loved golf, feeding all the neighbors from his garden yardwork, but mostly loved above all else spending time with his family.

He will be sorely missed by his family and friends.

Jones Mortuary is serving the family of Mr. Eugene Stair.

To order memorial trees or send flowers to the family in memory of Eugene Stair, please visit our flower store.